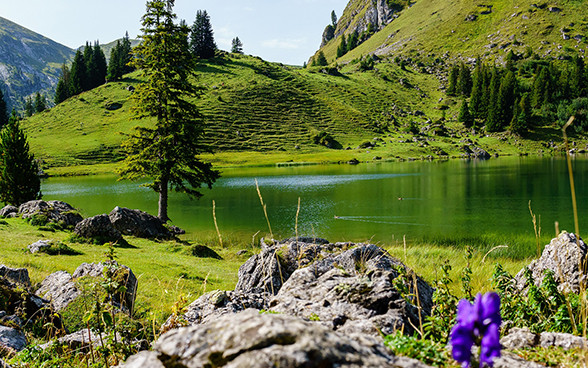 Another signal for Switzerland as a leading location for sustainable finance. (photo: EFV)

What exactly are green bonds and how has the market for them developed? Here is a brief introduction to the topic.

What are green bonds?

An issuer can raise money on the capital market with green bonds in the same way as with conventional bonds. In the future, green bonds will be a specific component of Confederation bonds and will diversify the Confederation's financing instruments. The money raised with green bonds cannot be used freely; it may be allocated exclusively to projects that have a positive impact on the environment, primarily in the areas of public transport, biodiversity, international cooperation and research.

What was the volume of the first green bond issued and how did the markets react?

The markets reacted favourably to the issuance of the first green Confederation bond. There was considerable interest in the new instrument, with bids totalling CHF 974 million. The Federal Treasury allocated 766 million at an annual yield of 1.47 %.

Who bought the green bond?

We cannot say for sure, as these bonds are bought by banks for investors and are not bearer bonds, i.e. the securities can also be traded. As is the case with conventional bonds, most of the green bonds are likely to be held by domestic investors, led by insurance companies, investment funds and pension funds.

Will more green bonds be issued in the future?

Yes, the federal government will regularly issue green bonds in the future or reopen the green bond just issued.

What volume will be issued?

How has the green bond market developed?

The market for green bonds is still relatively small, both in Switzerland and internationally, but it has grown robustly in the past few years. Green bonds were first issued in 2007, but have only become established in recent years. By the end of 2021, green bonds totalling around USD 1,400 billion had been issued worldwide, aggregated over all years. That sounds like a lot, but compared to the total volume of bonds outstanding on the capital market, it is a niche product. Around 14% of all green bonds issued during that period were attributable to governments. So governments play an important role in the issuance of green bonds. Sustainability will continue to grow in importance in the financial sector, both nationally and internationally.

What other countries issue green bonds?

Many European countries have already issued green bonds, with France, Germany and the UK being particularly active. The European Commission has also announced that around a third of the EUR 750 billion NextGenerationEU package is to be financed with green bonds and has already issued green bonds. The United States, the global benchmark issuer, has not yet announced any plans to issue a sovereign green bond. Overall, however, only a very small proportion of sovereign issues have been green bonds up to now.

What is the situation in Switzerland?

How were these green bonds developed? What is the basis?

The framework adopted by the Federal Council during its meeting on 17 August 2022 forms the basis for issuing green Confederation bonds. It shows how the bonds will be integrated into the Confederation's sustainability strategy, which green expenditure from the federal budget can be allocated to green Confederation bonds and how this expenditure will be reported. When preparing the framework, the Confederation was guided by the Green Bond Principles (GBP) of the International Capital Market Association, which are considered the market standard internationally. The framework was subjected to an external audit and certified.

What will the new Swiss Climate Scores mean for sustainable finance

Current science indicates that global warming beyond 1.5 degree Celsius could have a catastrophic impact on t . . .